You may have heard that the Indian Economic Services (IES) exam is difficult to pass, but we believe that this is not entirely correct.

Economics has real-world applications; everything we see and hear has an economic implication. To pass your Indian Economic Services (IES) exam, you simply need to have a more developed understanding of the subject, as well as the proper strategy, mindset, and techniques. If you have a bachelor’s or master’s degree in economics, you’re already on the right track because you know more about economics than the average person. So, let’s see how you can easily pass this exam as well.

Now, let’s move ahead with the importance of studying General Economics 1.

Why do we need to study General Economics I?

To make your preparations easier, we here at Ecoholics are providing the students with model questions and answers for the General Economics Module Topics.

In order to have a reference on how to write answers, every student looks for model answers while studying for the exam. So, here we at Ecoholics have made the work easy for you. Providing the best reference answers.

Q1. Explain the difference between Bandwagon effect and snob effect.

Network externalities are a special kind of externalities in which one individual’s utility for a good depends on the number of other people who consume the commodity.

Q1. Show the conditions for a Cobb Douglas production function under

are the laws of return compatible?

In economics and econometrics, the Cobb–Douglas production function is a

the technological relationship between the amounts of two or more inputs

produced by those inputs.

In its most standard form for production of a single good with two factors, the

buildings; the value of capital input divided by the price of

respectively. These values are constants determined by available

scale if the value of α + β is greater than one. Here, the

proportionate increase in production is greater than the increase

scale if the value of α + β is equal to one. For constant returns to

scale to occur, the relative change in production should be equal

to the proportionate change in the factors.

scale if the value of α + β is less than one. An incidence of

decreasing returns to scale would mean that the increase in

output is less than the proportionate increase in the input.

Returns to scale are not compatible with each other. Only one of the

returns to scale can exist at a point of time.

Q1. (a) Consider a profit-maximizing monopolist who is also a monopsonist and uses a single variable input. Determine the equilibrium price of the input. (b) In the context of part (a), explain the concept of monopsonistic exploitation of labour using a suitable diagram.

A firm is said to have monopsonist power when it represents itself as single buyer in the factor market. A monopsonist firm hires more labour by offering higher wage and consequently faces upward rising supply curve.

condition implies that the firm will face MRPL curve as demand curve for labour shown in the diagram. 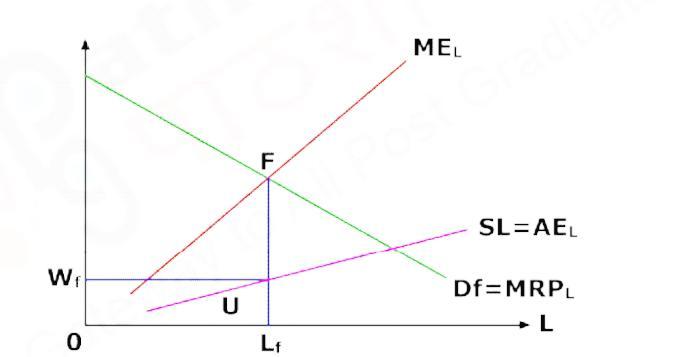 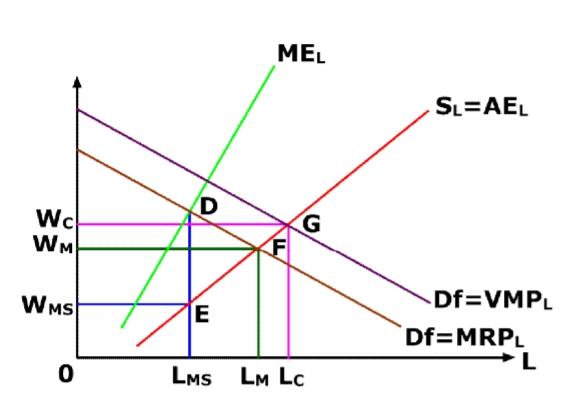 There are a few more hints regarding the PYQs, so what are you waiting for, click on the link nad download the full module-wise question and answers.

How to move forward

Cracking any exam with a good rank requires proper strategy and time management. For the preparation of Indian Economic Services, at least a year or 18 months of preparation is required. But what if the time gap is smaller, you have only 2 months left with the entire GE 1?

Here’s the optimal method of preparation you can follow to cover the syllabus in less time.

Here’s an amazing offer for you if you’re dedicated to Indian Economic Services and want to crack it on your first attempt. Grab the tremendous opportunity provided by Ecoholics for the preparations.

We all know that in the Indian Economic Services mains exam, writing skills play a major part in gaining extra marks.

So, here’s the trick by which you can gain extra marks for good handwriting and valuable content.

What is value addition?

Value addition is nothing more than combining graphs and mathematical steps with theories in your solution wherever necessary.

In every exam, there are topics that repeat every year and are important. Check for those topics, to have a view of where to start the preparation.

Also, go through the following links for more details.

Every aspirant looks for the preparation strategy of toppers to have an idea of where to give emphasis on the topics.

Here at Ecoholics, we have presented many toppers and are ongoing with their training in the academy.

Here’s one of the experiences of our students

So, what are you waiting for, pull up your socks and start your preparations with Ecoholics; India’s Largest Platform for Economics.